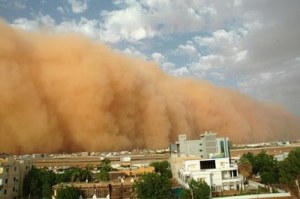 When weathermen in Arizona started calling the region’s huge, recent sandstorms haboobs, they got hate mail. People were “insulted,” by the term, demanded that weathermen explain “what gave them the right” to use it, and asked: “how do you think our soldiers feel?”

The fact is, haboob is a perfectly good English word. It’s in your dictionary. It is of Arabic origin however, and therein lies reason for the objections.

Aside from the ridiculous xenophobia this represents, it also indicates complete ignorance about how the English language works.

English is composed largely of words that were borrowed from other languages. Much of our vocabulary is of French or German origin, but English has borrowed words from virtually every language on Earth. Finnish (sauna); Tagalog (boondocks); Bantu (banjo); Mandinka (jazz); Mikmaq (caribou); Arawakan (barbecue) and so on.

In fact, the very concept of zero originated with Arabic mathematicians. Perhaps the yahoos would like to ban it from our arithmetic.