Posted on September 1, 2012 by Bruce DeSilva 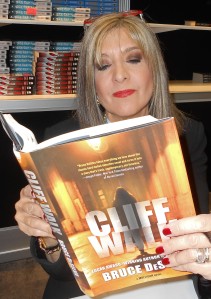 Hank Phillippi Ryan is the author of four mystery novels including her brand new one, The Other Woman. And she’s darned good.

Despite her literary success, she hasn’t quit her day job as an investigative reporter at the NBC TV affiliate in Boston. That’s a good thing, because she’s great at that too. Her journalism, which has changed laws and sent bad guys to prison, has won 27 Emmys and ten Edward R. Murrow awards.

You can learn more about Hank here.

Cliff Walk is the second novel in my series featuring Liam Mulligan, an investigative reporter at a dying Providence, R.I., newspaper. The first, Rogue Island, won the Edgar Award and the MaCavity Award. Reviewers are calling Cliff Walk even better. You can purchase the Mulligan novels here.