The Story Behind The Story of “Providence Rag,” Or Why Serial Killer Stories Make Me Squirm

I’ve certainly never thought of myself as delicate, but novels, movies, and TV shows about serial killers often make me squirm. It’s been that way ever since my real-life brush with one.

Not that I was ever in any danger. The killer in question was already behind bars before I spent several weeks of my life researching and writing a magazine story about him. It was the kind of article journalists call a hell of a good story, but my god, it was an ugly one.

The killer’s weapon of choice was butcher knives, and he used them to stab his victims over and over again, long after he knew they were gone. The dead included two sweet little girls. As a father, I couldn’t help but imagine their terror, and it sickened me. I know this sounds melodramatic, but sometimes, in my dreams, I can still hear them scream.

So two decades later, when I retired from a 40-year-long journalism career to write crime novels, I was sure I would never write one about a serial killer. I didn’t want to get that close to pure evil again.

Yet, those long-ago murders never stopped working on my subconscious, the place where novels are born.

For several years, I resisted the impulse to fictionalize the story. I told myself we’ve already got all the make-believe serial killers we need. Ever since Thomas Harris upped the ante with Hannibal Lecter, novelists and screenwriters have been tripping all over themselves trying to make each new psychotic butcher more twisted than the last. We’ve been treated to Jigsaw (who cuts his victims into puzzle pieces), The Grave Digger (who buries them alive in automobiles), Red John (who paints smiley faces on walls with human blood), Floyd Feylin Ferrell (who serves investigators chili made from his victims’ flesh) … I could go on, but I trust I’ve made my point.

When the compulsion to fictionalize the real-life case became too great to resist, I knew I would have to write a different kind of serial-killer book, one in which the focus would be on something other than brutal murder and criminal detection.

The result is Providence Rag, the third novel in my Edgar Award-winning series featuring Liam Mulligan, an investigative reporter for a dying newspaper in Providence, Rhode Island. The murders are committed and the killer is imprisoned in the first 75 pages. The rest of the book is dedicated to exploring an impossible moral dilemma: What are decent people supposed to do when a legal loophole requires that an unrepentant serial killer be released–and when the only way to keep him locked up is to fabricate new charges against him? 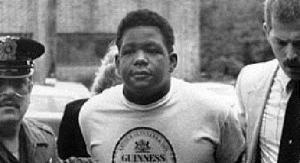 Craig Price Shortly After His Arrest

The real criminal who inspired the novel is Craig Price, the most notorious murderer in Rhode Island history. He slaughtered two women and two children before he was old enough to drive. Just 13 years old when he began killing, and 15 when he was caught, he was the youngest serial killer in U.S. history. But that’s not the interesting part.

When Price was arrested in 1989, the state’s antiquated juvenile justice statutes had not been updated for decades, and when they were written, no one had ever imagined a child like him. So the law required that all juveniles, regardless of their crimes, be released and given a fresh start at age 21.

The state legislature promptly rewrote the law so this wouldn’t happen again, but in America, you can’t change the rules retroactively. So the authorities were faced with the chilling prospect of releasing Price after he’d served only six years for his crimes. Robert K. Ressler, one of the first FBI profilers, and the man credited with coining the term “serial killer,” was horrified. If Price gets out, he told me, “you’ll be piling up the bodies.”

But Price did not get out. Today, 25 years later, he remains behind bars, convicted of a series of assaults and offenses he supposedly committed while in prison. I have long suspected that some of these charges were fabricated, but at the very least it is obvious that Price has been absurdly over-sentenced. For example, the state gave him additional prison time for breaking a rule against swearing at correctional officers. Prisoners do that all the time, of course, but Price was the first to have his sentence extended for it. Later, he was given 30 years for contempt because he declined to submit to a court-ordered psychiatric examination.

Have the authorities abused their power to prevent Price’s release? Quite possibly. Should he ever be set free and given the chance to prey on the innocent again? I don’t think so. The ethical dilemma the case poses fascinates me. No matter which side you come down on, you are condoning something that is reprehensible. I wrote the novel to explore the implications of all this.

In real life, this conundrum hasn’t caused any soul-searching in Rhode Island–at least not publicly. Everyone seems content to let Price rot in prison. And who can blame them?

But a novel is fiction, after all, and Providence Rag is in no way intended to accurately depict real events. In the book, the ethical issue at the heart of the story haunts Mulligan and his colleagues at the Providence Dispatch.

Some people argue that authorities who are faking charges against the killer are perverting the criminal justice system. And if they are allowed to get away with it, what’s to stop them from framing someone else? Besides, it’s the journalist’s mission to report the truth.

Others argue that if the Dispatch breaks the story and the killer is released, he’s bound to kill again. And when that happens, the newspaper will have blood on its hands.

The dilemma eventually embroils Mulligan, his fellow reporters, his editors, and the entire state in a heated confrontation over where justice lies.

You can purchase Providence Rag in hardcover, e-book, and audio editions here.

This article originally appeared on The Rapsheet blog.