Interview About “A Scourge of Vipers,” The New Novel In My Edgar Award-Winning Series 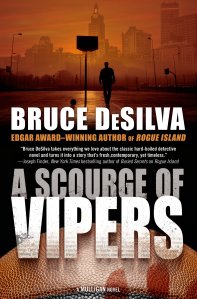 BookMarket Buzz Blog, one of the top online sites for talk about new books, interviewed me about A Scourge of Vipers, the latest crime novel in my Edgar Award-winning series featuring Liam Mulligan, an investigative reporter for a dying newspaper in Providence, Rhode Island. Here’s the text:

What inspired you to write your new book?
I’ve long been intrigued by the hypocrisy surrounding gambling on sporting events. Federal law bans it in all but four states that were grandfathered in, and most states (which rake in millions from official lotteries) also have laws against it. Yet the total Americans bet on sports is estimated at three hundred and eighty billion dollars annually—enough to fund the Pentagon for twelve months with enough left over to start another small war. Studies indicate that eighty-five percent of Americans place sports bets at least occasionally, much of it on the Super Bowl and the NCAA’s March Madness basketball tournament. Recently, a number of states including New Jersey, where I live, have proposed legalizing it so they can tax the revenue. The NCAA and the major sports leagues are vehemently opposed (although the NBA softened its opposition recently), claiming that legalization would threaten the integrity of their games. They take this position even though they profit handsomely from sports betting. It is, after all, a major reason why many people follow sports. But the sports leagues are not alone in viewing legalization as a threat. Las Vegas casinos want to keep their near-monopoly on legal sports gambling, and criminal organizations are aghast at the prospect of losing the cash they rake in from bookmaking. Pitting these powerful forces against one another in a struggle over legalization is a rich subject for a hardboiled crime novel.

What are some of the key themes presented in your new book?
In A Scourge of Vipers, Rhode Island’s colorful fictional governor, a former religious sister nicknamed Attila the Nun, proposes legalizing sports gambling to ease the state’s budget crisis. Powerful organizations that have a lot to lose—or gain—if gambling is made legal flood the little state with money to buy the votes of state legislators. As my protagonist, Liam Mulligan, digs into the story, several people including a state legislator and a mobbed-up bagman turn up dead. And shadowy forces try to derail Mulligan’s investigation by destroying his career, his reputation, and perhaps his life. The result is a suspenseful murder mystery that provides a vehicle for exploring the duel themes of the hypocrisy surrounding sports betting and the corrupting influence of big money on politics. This is the fourth novel featuring Mulligan, and each of them also deals with the decline of America’s newspapers—and the damage being done to the American democracy as these honest brokers of news and information fade into history. It is my hope that as readers see the skill and dedication with which Mulligan works, they will gain a greater appreciation for what is being lost.

Is it similar or different from your prior books?
Each Mulligan novel focuses on a different main theme. For example, the second, Cliff Walk, is at once a murder mystery and an exploration of sex and religion in the age of ubiquitous pornography. But each novel is also different because the ordeals I put Mulligan through can’t help but change him. At the start of Cliff Walk, for example, he believes that what men do with their money and what women do with their bodies is nobody’s business but their own. But as he investigates the public corruption that allows prostitution and pornography to flourish, he is forced to wade through the ugly underbelly of the sex trade; and what he finds challenges everything he has believed about sexual morality and religion. The evolution of Mulligan’s character keeps each new story fresh. But perhaps the main difference is that in A Scourge of Vipers, the tone is lighter. The first three novels were littered with innocent victims, but in the new book, nearly everyone who gets hurt had it coming.

What challenges or rewards came about from writing it?
Each book in the series has presented a different challenge. The first, the Edgar Award-winning Rogue Island, poured out effortlessly, the first draft needing only a few minor revisions. That made me think that the next one would also come easy, but instead, the plotting was a struggle. When I mentioned that to a crime-writing colleague, he said, “Of course. You spent years thinking about the first book, and now you’re trying to write the second one in a few months.” Luckily, A Scourge of Vipers also came easily; but now I’m struggling again as I try finish the next one, tentatively titled Dreadline, for publication next year. For me, the biggest challenge is always the same as the biggest reward: discovering the story as I write. I never outline. Instead, I being each novel with a clear idea of its theme and set my characters in motion to see what will happen. I do this partly because I figure that if I don’t know what’s going to happen next, my readers probably won’t either. But the main reason is that discovering the story is what puts my butt in my writing chair every day. If I knew in advance how it was all going to turn out, my desire to write the story would vanish.

Did you tap into the journalist side from your 40 years in the media when writing this book?  My books are very much novels of place–an evocation of 21st century life in Providence, R.I. I know Providence well because I began my journalism career there as an investigative reporter. Unlike the big, anonymous cities where many fine crime novels are set, Providence is so small that it’s claustrophobic. Almost everybody you see on the street knows your name, and it’s almost impossible to keep a secret. Yet it’s big enough to be both cosmopolitan and rife with urban problems. And its history of organized crime and corruption, which dates all the way back to a colonial governor dining with a famous pirate named Captain Kidd, makes it an ideal setting for crime fiction. I have made Providence not just the setting but something akin to a major character. One reviewer called my portrayal of the place “jaundiced but affectionate,” and I think that gets it exactly right. And by making my protagonist an investigative reporter instead of a cop or a private eye, I am writing about what I know best.

What should make people go out and buy it?  The books I most enjoy reading use the popular form of the crime novel to address significant social issues. If you admire the work of writers such as George Pelecanos, Laura Lippman, and Richard Price, I think you will like A Scourge of Vipers, which has already received starred reviews from Publishers Weekly and Library Journal. But let me give the last word to Mystery Writers of America Grand Master James Lee Burke, who read the book months before it was published. Here’s what he had to say: “Bruce DeSilva writes a story in the tradition of Hammett and Higgins, and he writes it with the knowledge of an old-time police reporter. DeSilva knows cops, corruption in eastern cities, wiseguys, rounders, bounders, gamblers, and midnight ramblers. He writes with authority about the issues of our times, and he does it with honesty and candor. His newsman protagonist feigns the role of the cynic, but in his way represents the virtues most of us admire. If you want a hard=boiled view of how a city actually works, this is your book.”

A Scourge of Vipers is being published in hardcover and e-book editions by Forge on April 7, and it can be ordered in advance here. An audio book edition from Audible will be available soon.

The above post was originally published on the Bookmarketing Buzz Blog where you can find a lot of great articles about books and the publishing business.