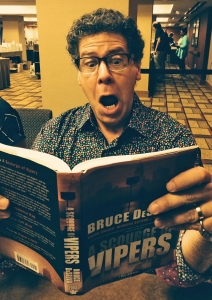 Sean Chercover is a best-selling thriller writer–and a very nice guy. You can learn more about him and his work here.

A Scourge of Vipers by Bruce DeSilva is the fourth in my Edgar Award-winning series of hardboiled crime novels featuring Liam Mulligan, an investigative reporter for a dying newspaper in Providence, R.I.  The new novel has received rave reviews in The New York Times, Publishers Weekly, and a host of other publications. You can order any of the books in the series from independent or chain online bookstores by following this link.