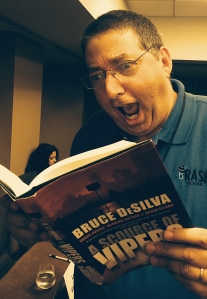 Lee Goldberg is a prolific writer of both crime novels and TV scripts, including 15 “Monk” novels based on the TV show of the same name.  His TV writing and producing credits include Spenser: For Hire, seaQuest, The Glades, Baywatch, and Diagnosis Murder. You can learn more about Lee and his work here.

A Scourge of Vipers by Bruce DeSilva is the fourth in my Edgar Award-winning series of hardboiled crime novels featuring Liam Mulligan, an investigative reporter for a dying newspaper in Providence, R.I.  The new novel has received rave reviews in The New York Times, Publishers Weekly, and a host of other publications. You can order any of the books in the series from independent or chain online bookstores by following this link.