I always enjoy discovering a fine new crime novelist, so I’m indebted to Barbara Peters of Poisoned Penn Press and the proprietor of the Poisoned Pen bookstore in Scottsdale, AZ, for introducing me to Steven Axelrod.

Steven isn’t exactly new. His latest novel, Nantucket Grand, is the third in his series set on the island of Nantucket – but he’s new to me.

Nantucket Grand has everything I look for in a crime novel – tight, vivid prose, a sharply-drawn setting, an intricate plot with lots of unexpected twists, well-crafted characters, and an appealing protagonist in the person of Police Chief Henry Kennis, a dogged investigator you’re going to enjoy following on all of his adventures.

If you’re like me, you think of Nantucket as an Atlantic coast island with a rich whaling history and a present as a great vacation destination. But the Nantucket of Axelrod’s imagination is a land of tensions between locals and well-heeled summer visitors, and between those who would preserve its natural beauty and those who would bulldoze everything to build more playgrounds for the rich.

The story begins when a local Land Bank executive dies in what appears to be a hunting accident. But when someone sets a historic summer cottage on fire, the body of a young Jamaican boy is found floating in the harbor, and a local hero is murdered, Chief Kennis has all that he can handle.

As Kennis digs into the seemingly unrelated crimes, he discovers they are all part of a diabolical conspiracy.

Kennis bears a superficial resemblance to Jesse Stone, the hero of a series of crime novels by the late, great Robert B. Parker – a series that has been picked up and given new life by another fine writer, Reed Farrel Coleman. Both Jesse and Kennis are former Los Angeles detectives who have made new lives for themselves as small-town police chiefs in coastal Massachusetts. But moody Jesse tends to spend his idle moments drinking whiskey, brooding about the injury that ended his professional baseball career, and obsessing about his bitch of an ex-wife. Kennis spends his writing poetry and attending island literary events. 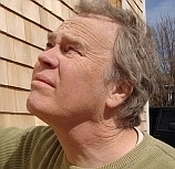 Axelrod holds an MFA in writing from Vermont College of the Fine Arts and remains a member of the WGA despite a long absence from Hollywood. His work has been featured on various websites, including the literary e-zine Numéro Cinq, where he is on the masthead. His work has also appeared at Salon.com and The GoodMen Project, as well as the magazines PulpModern and BigPulp. He lives on Nantucket, where he paints houses and writes, often at the same time.

Nantucket Grand will be published on May 3, but you can place an advance order here.