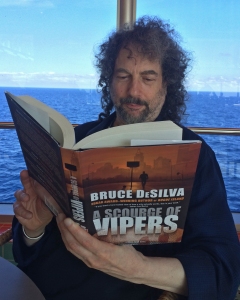 Magic Dick, aka Richard Salwitz, is best known as one of the founding members of the J. Geils Band. His brilliant harmonica playing on unforgettable cuts like “Whammer Jammer”  led The Rolling Stone Record Guide to proclaim him perhaps the finest white blues harmonica player ever (although Rick Estrin might have a thing or two to say about that.)

Subsequently, he teamed up with J. Geils again in a band called Bluestime, which often toured as part of as part of B.B. King’s Bluesfest. Later, he became a regular with the Legendary Rhythm & Blues Revue led by Tommy Castro, appearing regularly on blues cruises. These days, he’s touring and recording with Shun Ng, an astonishing young vocalist and blues guitarist.

I first met Magic Dick on a blues cruise last fall, and we fell into a long conversation on the pool deck. As it happens, we have a lot in common. We both spent our formative years in Massachusetts. We both love books, with him having a surprising interest in book design. And, of course, we both love the blues.

You can learn more about Magic Dick and watch a video of a recent performance with Ng by clicking here.

Liam Mulligan, the hero of my series of hardboiled crime novels, is a big blues fan too.

“Why the blues?” Mulligan asks himself in the next  novel, The Dread Line, which will be published next fall. “Why was I always drawn to music about hard times at the bottom of a shot glass? The music of the scorned and shattered. At the end of most every day—even the ones that didn’t involve shaking a tail, tracking down thieves, or staring at a broken body—I’d lean back with a glass of something bitter and drown in Koko Taylor’s growl, Buddy Guy’s soulful riffs, or the vibing wire of Stevie Ray Vaughn’s guitar. Just like my dad did before the cancer took him. He’d come through the door, exhausted from another day of delivering milk, put a scratchy Son Seals album on the turntable, pull out his Comet harmonica, and play along. Like him, I belonged to the downtrodden tribe that turns misery into music—the kind of music that warns us what the world is like and steels us against it. My old job as an investigative reporter, like my new one as a detective, was to probe the dark hearts we pray against. I’d locked eyes with murderers. Wondered, more than once, if something rotten was eating away at me, turning me into the very thing that I fear. Then the twang of a blues guitar would fill the room, preaching that even in the darkest of times, the idea of light exists—and that the purpose of life is just to live it.”

A Scourge of Vipers by Bruce DeSilva is the fourth in my Edgar Award-winning series of hardboiled crime novels featuring Liam Mulligan, an investigative reporter for a dying newspaper in Providence, R.I.  The novel has received rave reviews in The New York Times, Publishers Weekly, and a host of other publications. You can order any of the books in the series from independent or chain online bookstores by following this link.