My Review of “The Last Good Heist,” the Untold Story of the Second Largest Robbery in U.S. History 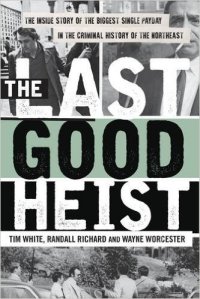 The Bonded Vault caper of 1975, a case of the mob stealing from the mob, was the second-biggest heist in U.S. history, topped only by the Isabella Stewart Gardner Museum robbery in 1990.

The job, pulled off in Providence, R.I., by a motley crew of low-level career criminals on orders from New England’s Mafia boss, netted $32 million in 1975 dollars, the equivalent of $140 million today.

The reason almost nobody knows this, the reason the heist has received so little notoriety outside of New England, is that the authorities first estimated the take at a million dollars and later raised it to just $4 million. Because the victims were mostly organized crime figures and the loot consisted largely of cash, rare coins, silver bars, jewels, and bearer bonds—the fruits of illegal activities that they were trying to conceal from the IRS and the police—it was many years before the facts dribbled out. None of the loot was ever recovered.

When it first went down, I was a fledgling investigative reporter at The Providence Journal, which was at the time the finest small-city metropolitan newspaper in America. And boy did I want a piece of that story. But it was quickly scooped up by the newspaper’s dogged, two-man investigative team—Jack White, who had recently won the Pulitzer Prize for disclosing that Richard Nixon had cheated on his income taxes, and Jack’s crackerjack sidekick, Randall Richard, who spent most of his career at The Journal before coming to work for me as an Associated Press national writer.

Now, years after Jack’s untimely death, Richard has teamed up with two other fine journalists, Jack’s son Tim and Journal alumnus Wayne Worcester, a retired University of Connecticut journalism professor, to tell the full story in The Last Good Heist: The Inside Story of the Biggest Single Payday in the Criminal History of the Northeast. The true crime book will be published later this year by Globe Pequot Press and is available for pre-order from amazon.com here.

The Last Good Heist is a rollicking yarn of betrayal, murder, and expert detective work superbly told in prose largely written by Worcester, one of the

finest writers The Journal ever produced. It is also a stark reminder of the days when Mafia chieftain Raymond L.S. Patriarca was the most powerful and feared man in New England, and offers a loving tribute to the heyday of a once great newspaper, a time when “if the paper didn’t print something, it may as well have never happened.”

The authors offer a richly detailed account of the robbery itself, the criminal and personal histories of the men who pulled it off, and the stupid mistakes and the investigative tactics that eventually brought some, but not all of them, to justice.

How great is the detail? The writers spill everything down to the name of the Las Vegas valet who catered to the lead robber’s every whim during a reckless post-heist spending spree, the name of the myna bird one of the criminals was allowed to keep in his jail cell while awaiting trial, and even the slur the guy taught the bird in order to insult his keepers.

The writing falls off a bit in the last few chapters, which were not written by Worcester, but readers interested in organized crime, criminal detection, and the story behind of one of the country’s greatest heists will find this book richly satisfying.