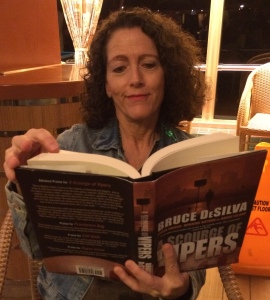 Nancy Wright reading “A Scourge of Vipers” by Bruce DeSilva

Nancy Wright is one of the hottest blues saxophone players we have, and she’s been just that for more than three decades. How good is she? Good enough to have toured with the likes of  John Lee Hooker and Lonnie Mack. Good enough to have shared the stage with Stevie Ray Vaughn, Albert King, and Albert Collins.

Last year, she branched out with “Putting Down Roots,” an album of songs that spans blues, R&B, funk, and gospel. On it, she sings and plays a half dozen instruments, and she wrote the songs herself. You can learn more about Nancy and her music here.

I’m a big fan of the blues and of Nancy, and so is Liam Mulligan, the hero of my series of hard-boiled crime novels set in Providence, R.I.

“Why the blues?” Mulligan asks himself in the next  novel, The Dread Line, which will be published next fall. “Why was I always drawn to music about hard times at the bottom of a shot glass? The music of the scorned and shattered. At the end of most every day—even the ones that didn’t involve shaking a tail, tracking down thieves, or staring at a broken body—I’d lean back with a glass of something bitter and drown in Koko Taylor’s growl, Buddy Guy’s soulful riffs, or the vibing wire of Stevie Ray Vaughn’s guitar. Just like my dad did before the cancer took him. He’d come through the door, exhausted from another day of delivering milk, put a scratchy Son Seals album on the turntable, pull out his Comet harmonica, and play along. Like him, I belonged to the downtrodden tribe that turns misery into music—the kind of music that warns us what the world is like and steels us against it. My old job as an investigative reporter, like my new one as a detective, was to probe the dark hearts we pray against. I’d locked eyes with murderers. Wondered, more than once, if something rotten was eating away at me, turning me into the very thing that I fear. Then the twang of a blues guitar would fill the room, preaching that even in the darkest of times, the idea of light exists—and that the purpose of life is just to live it.”

A Scourge of Vipers by Bruce DeSilva is the fourth in my Edgar Award-winning series of hardboiled crime novels featuring Liam Mulligan, an investigative reporter for a dying newspaper in Providence, R.I.  The novel has received rave reviews in The New York Times, Publishers Weekly, and a host of other publications. You can order any of the books in the series from independent or chain online bookstores by following this link.