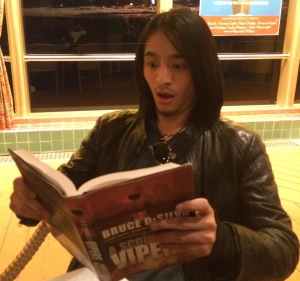 Shun Ng is young guitar player of uncommon skill and originality with a voice that Magic Dick describes as a cross between James Brown and Michael Jackson. Don’t believe it? Check THIS out.

I first met him last fall on a blues cruise, which is when I snapped this photo. You can learn more about him and his music here.

Shun has partnered with Magic Dick, the great blues harmonica player who first came to prominence with the J. Geils Band, and they are fantastic together.

Mostly they play the blues, but they dabble in rock and soul, too.

Liam Mulligan, the hero of my Edgar Award-winning series of crime novels, loves the blues as much as I do, listening to the likes of Buddy Guy, Tommy Castro, Jimmy Thackery and others as he cruises around New England looking for trouble. And Roomful of Blues, a band fronted by my buddy Phil Pemberton, has made an appearance in two of the novels.

A Scourge of Vipers by Bruce DeSilva is the fourth book in the series, which has received rave reviews in The New York Times, The Washington Post, Publishers Weekly, and a host of other publications. You can order any of them from independent or chain online bookstores by following this link.