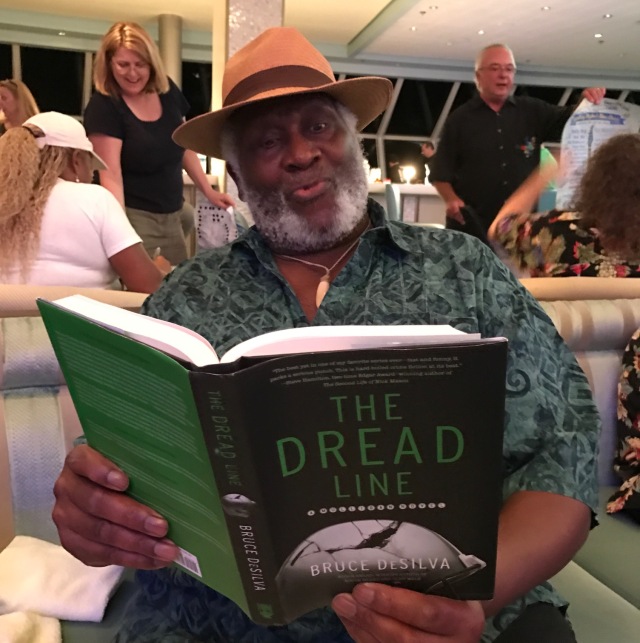 Taj Mahal, the legendary blues singer, song writer, guitarist and harmonica player, is a two-time Grammy Award winner. My wife Patricia and I met him a week ago on a Blues Cruise in the Caribbean. To learn more about him and his music, click here.

Patricia and I are lifelong fans of the blues — and so is the hero of my crime novels, Liam Mulligan.

Taj Mahal on the Blues Cruise in October.

“Why the blues?” Mulligan asks himself in The Dread Line. “Why was I always drawn to music about hard times at the bottom of a shot glass? The music of the scorned and shattered. At the end of most every day—even the ones that didn’t involve shaking a tail, tracking down thieves, or staring at a broken body—I’d lean back with a glass of something bitter and drown in Koko Taylor’s growl, Buddy Guy’s soulful riffs, or the vibing wire of Stevie Ray Vaughn’s guitar. Just like my dad did before the cancer took him. He’d come through the door, exhausted from another day of delivering milk, put a scratchy Son Seals album on the turntable, pull out his Comet harmonica, and play along. Like him, I belonged to the downtrodden tribe that turns misery into music—the kind of music that warns us what the world is like and steels us against it. My old job as an investigative reporter, like my new one as a detective, was to probe the dark hearts we pray against. I’d locked eyes with murderers. Wondered, more than once, if something rotten was eating away at me, turning me into the very thing that I fear. Then the twang of a blues guitar would fill the room, preaching that even in the darkest of times, the idea of light exists—and that the purpose of life is just to live it.”

The Dread Line is the fifth book in the Edgar Award-winning series of hardboiled crime novels by Bruce DeSilva. In it, New England Patriots, still shaken by a series of murder charges against one of their star players (true story) have hired Liam Mulligan, the hero of the novels, to investigate the background of a college star they are thinking of drafting. At first, the job seems routine, but as soon as he starts asking questions, he gets push-back. The player has something to hide, and someone is willing to kill to make sure it remains secret.

To order The Dread Line, you can choose from a list of independent or chain online bookstores here.