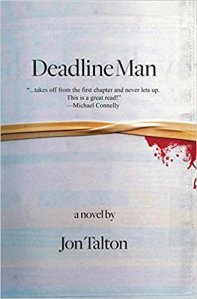 Several years ago, after one of my book signings at the Poisoned Pen Bookstore in Scottsdale, AZ, the proprietor, Barbara Peters, gave me a copy of Deadline Man, a stand-alone crime novel by Jon Talton published by her independent publishing house, Poisoned Pen Press. Since Talton’s protagonist was a journalist at a dying newspaper — just like the hero of my Liam Mulligan crime novels — she figured I’d enjoy it.

I brought the book home and tossed it on my to-be-read pile. There, it was quickly buried under a growing stack of other books I intended to read. But yesterday, I finally dug it out, and . . . wow!

The action begins when a wealthy hedge fund manager plunges to his death from his office balcony moments after giving a mundane interview to a business columnist for the fictional Seattle Free Press. At first, it looks like a suicide, but gradually, the death becomes entangled in a complex and baffling conspiracy involving two missing teenage girls, a business conglomerate that is secretly up to no good, the FBI, a rogue private security outfit, a deadly team of killers, and . . . you’ll have to read the book to find out where this all leads.

The characters are well-drawn, the action is non-stop, the tension is gripping, and the writing is tight and vivid.

As an old newspaperman myself, I also admire how well Talton captures the atmosphere inside the newsroom of a once-great newspaper now facing oblivion. 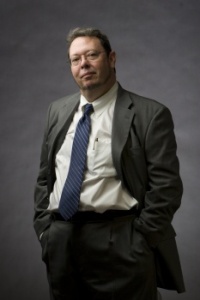 Talton is an old newspaper hand, too — a former columnist and editor at the Dayton Daily News, Cincinnati Enquirer, Rocky Mountain News, Charlotte Observer, and Arizona Republic. He is currently covering business for the Seattle Times. Turns out, he’s also the author of a series of mysteries featuring a character named David Mapstone and several other books that I’ve yet to read. You can learn more about him and his writing here.

You can order a copy of Deadline Man here.

I highly recommend that you do.