My Review: P.I. Leonid McGill returns in `Trouble Is What I Do’ 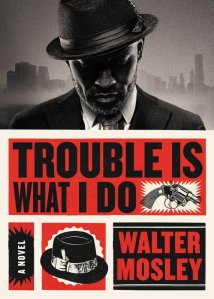 Many years ago, a Mississippi bluesman named Catfish Worry had an affair with the daughter of a wealthy white banker. Their dalliance produced a son who could pass for white.

That son is now a wealthy banker himself. He is also a vicious racist. When he learns that Worry plans to expose the family’s history, he hires a hit team to take the old man out. Worry counters with Leonard McGill, a private eye whose  network of underworld acquaintances are a match for anyone Charles’ money can buy.

The threat of violence looms over every page of Walter Mosley’s Trouble is What I Do, but action fans may be disappointed that the gun-play occurs offstage. The charms of this short novel lie in Mosley’s memorable characters, his portrayal of the world McGill inhabits and the author’s uniquely lyrical writing style.

For the full text of my review for the Associated Press, please click here.