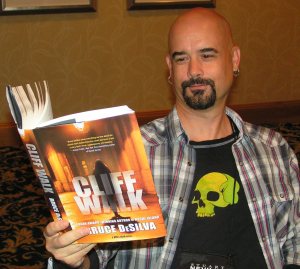 Bill Loehfelm’s first three novels, Fresh Kills, Bloodroot, and The Devil She Knows, are outstanding. Each is set in his native Staten Island.

When I caught up with Bill last week at Bouchercon, the huge crime-fiction conference, he was excited about his next one, The Devil in Her Way, the first to be set in New Orleans, where he has lived for more than a decade.

But he hasn’t forsaken his hometown entirely. Bill and I both have short stories in Staten Island Noir, an anthology coming from Akashic Press in November.

You can learn more about Bill and his work here.

Cliff Walk is the second crime novel in my series featuring Providence, Rhode Island investigative reporter Liam Mulligan. The first not only won the Edgar Award and the Macavity Award but was a finalist for the Anthony, Barry, and Shamus awards. Reviewers say Cliff Walk is even better. You can purchase the Mulligan novels here.