I Thought He Would Live Forever

At my age, old friends and colleagues die with such frequency that I have almost become numb to it, but somehow I thought that Steve Parisi would live forever.

He was a big, boisterous man with a luxurious head of silver hair, a passion for good food and drink, a closet full of Hawaiian shirts, and an addiction to rock ‘n roll. He loved his friends more than most people love their families, and he had enough of them to fill a sports arena. He was a devoted family man, doting on wives, children, grandchildren, nephews and nieces even–or perhaps I should say especially–when circumstances landed some of them on his doorstep at an age when child rearing is usually a distant memory. He was generous to strangers. His out-sized personality dominated every room he ever lumbered into.

Every time I saw him, he had a huge, ain’t-life-grand smile that rarely faded.

We met as teenagers, members of the 1964 graduating class of Dighton-Rehoboth Regional High in Massachusetts. That should have made us lifelong friends, but we weren’t. Looking back on it now, I realize that our 100-student class was a bit cliquey, although I don’t recall any meanness to it. Students in college prep classes just tended to socialize together, and Steve wasn’t one of them.

After graduation, I didn’t see or hear from him for 46 years. So I was taken aback when he got in touch in 2010, after my first crime novel was published, and invited me to dinner at Adino’s, his favorite Italian restaurant in Providence, R.I.

A few days later, as I strolled into the place, I saw a bombastic sixty-something holding court at the bar. Whatever he was saying had an audience of drinkers and barkeeps enthralled. He turned, somehow recognized me (although I looked nothing like I did in high school) and said, “Hey, I was just braggin’ about knowing you.”

I stuck out my hand. He ignored it and wrapped me up in a spine-cracking bear hug.

“Come on, let’s get a table,” he said, leading me through the restaurant to a four-top. On the way, everyone in the place shouted a greeting (“Hi, Steve!” “What’s shakin’, Steve?”) as if he were some mix of the mayor and the Godfather.

After he ordered drinks for us both, the waitress, who he knew by name, handed us menus and asked if we wanted to hear the day’s specials. Steve’s grin got wider, and he rattled them off.  She raised an eyebrow.

“Hey, I was here for LUNCH!” he said and treated the whole room to his booming laugh. 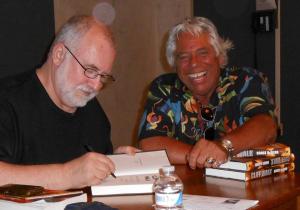 Signing a book for Steve at the Providence Public Library.

And then we talked. About my work and his. About my family and his. About the Red Sox and the Patriots. About being young and growing old. By the time I left, we were already the best of friends. And that, I gather, is how it usually went when anybody met Steve.

Over the last eight years, we met nearly every time I came to Providence, sometimes to promote my latest novel, sometimes to visit family that lived nearby. When I spoke at local bookstores or the Providence Public Library, he didn’t just come. He dragged a crowd along with him. Nearly every time, we had lunch or dinner at Andino’s. Always, I had to fight him for the check, and most times I lost. I ended up naming a recurring character for him in several of my books. 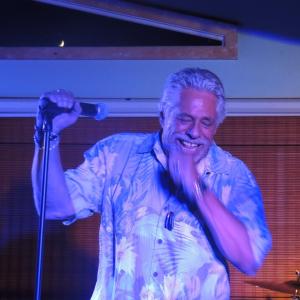 It would take more time than I’ve got, and more words than you would want to read, to tell you everything that is worth knowing about Steve’s life.  About how he went to work after high school for his father’s little basement waterproofing company and transformed it into a firm that worked on major restoration projects including Providence’s Biltmore Hotel. About how he sang in local clubs for years with a rock ‘n roll band. About how he beat throat cancer and returned to the stage, belting out 1960s classics in a voice that sounded like hard water flowing over gravel. About how he always spoke his mind and didn’t give a shit whether you liked it. About how almost everybody seemed to love him.

Steve died unexpectedly sometime over the holidays. I got the news late, alerted by a friend on Facebook. I’ll be forever grateful for his friendship and forever regretful that I didn’t get to know him sooner. I’m sure I’ll never stop missing him. If he could see me now, I think I know what he’d say. He’d tell me to buck up, order a martini, cue Dylan on the stereo, and have a good laugh.

But I have to go now and find a quiet place to be sad.

You can see Steve perform by clicking here.

4 Responses to I Thought He Would Live Forever